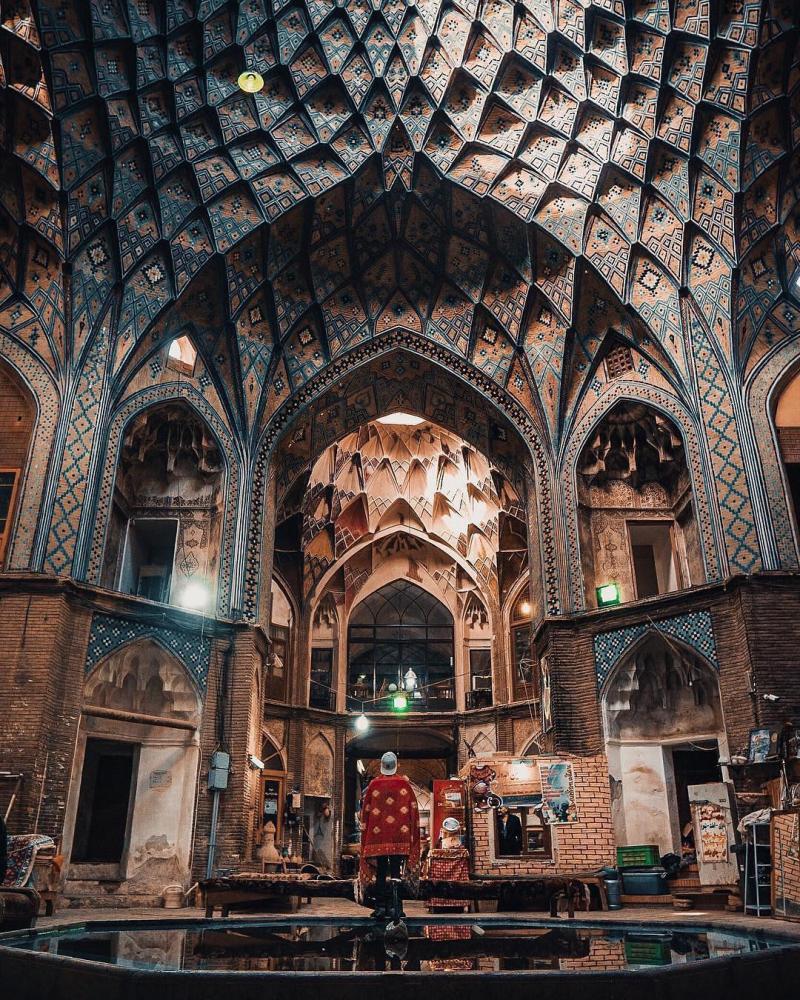 One of the most important historical and visitable monuments in Kashan is the historical bazaar of Kashan that has included more than 40 historical buildings in itselfand its south entrance is Kamal al-Molk Square and its north entrance is the beginning of Darvazeh Dowlat Square.
The historical bazaar in Kashan includes orders (the main path of bazaar), categories (different classes), corridors, Khan house (a merchant house that had the general role of sales), Khanbar or Kalanbar (a place for collecting and storing goods and manipulating them), Timcheh (the center of several houses or merchant houses), Kaisarieh (a place with a separate door to do art and delicate works like goldsmithing and needle works) and stores.
There are orders such as coppersmiths, goldsmiths, shoemakers, mercers and small markets of Mianchal, Malek, banks, dyers, mosques, boqehs, inns, timchehs, baths and numerous cisterns in this bazaar, each of which has joined the main body of the bazaar in different periods.
Customs and New Inns, Naraqi Houses, Khan Bath, Zarkesh Serra, Qomi Serra, Kaisarieh, cistern serra, square serra, Haj Mohammad Sadeq Timcheh, the beautiful and famous Timcheh of Amino l-Dowleh, Mianchal Mosque and School, Tabrizi Mosque, Malek serra, Seyyed Agha Timcheh, Shoemakers and Pilgrim Mosque and Chain Door Cistern form a part of the historical bazaar of Kashan. The main historical background of Kashan Bazaar is for Buyids and then Seljuks. However, its prosperous period was in Safavid era, especially Shah Abbas Safacvi time.
The monument is registered on 8th of Shahrivar 1255 as one of Iran’s national monuments with registration number 1284.

#بازار #کاشان
Kashan’s #historic #bazaar is one of the best in Iran. Busy but not manic, #traditional but with a nod at modern goods, large enough to surprise but not to get lost in, it’s a great place to wander for a couple of hours, especially in the late afternoon when the lanes are full of shoppers. The multi-domed roof of the bazaar dates from the 19th century, but the site has been the centre of trade in Kashan for almost 800 years.
Other notable features of the bazaar include the Seljuk-era Masjed-e Soltani (Soltani Mosque), located on the Main Line and open only to men, and the 800-year-old Mir Emad Mosque, along the Copper Line.
Of course, a bazaar ought to be shopped in. If the hardware shops hold little #attraction and the textiles fail to bring out your inner seamstress, there is at least rose water of the highest quality midway along Main Line or boxes of Kashani biscuits from one of the bazaar’s many patisseries – the nargili (coconut macaroons) are particularly delicious.