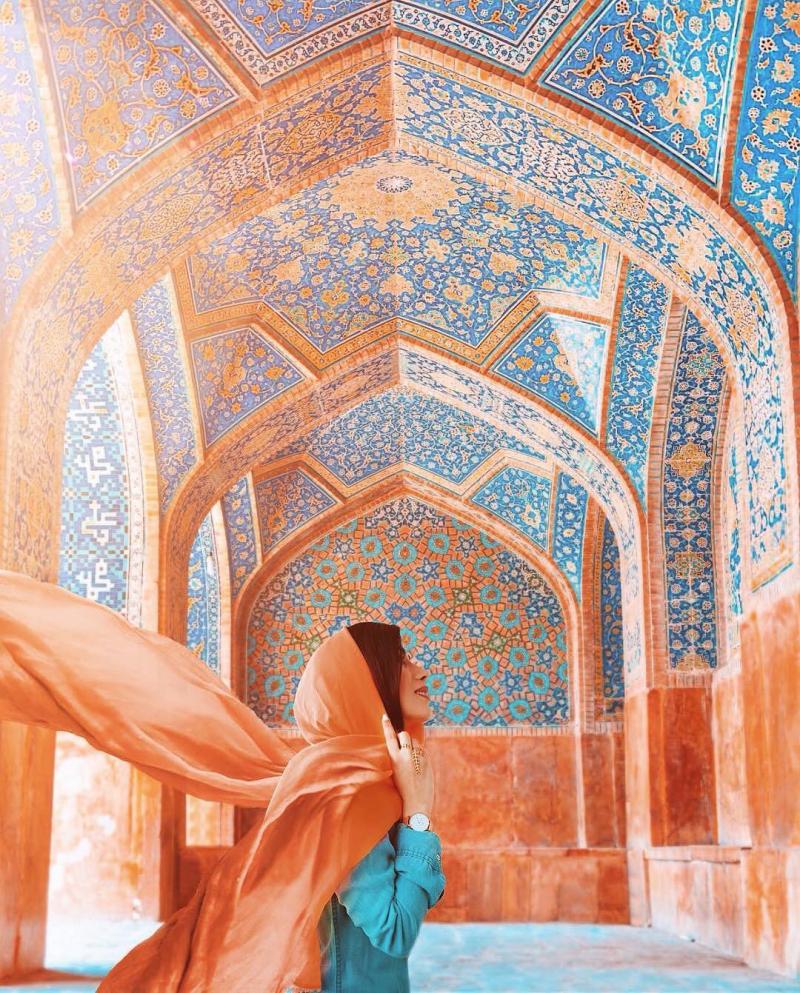 The Shah Mosque (Persian: Masjed-e Shah), also known as Imam Mosque , renamed after the 1979 Islamic revolution in Iran, and Jaame’ Abbasi Mosque, is a mosque in Isfahan, Iran, standing in south side of Naghsh-e Jahan Square. Built during the Safavid period, ordered by the first Shah Abbas of Persia. The mosque has also been called Jameh Mosque of Isfahan over the course of years.

It is regarded as one of the masterpieces of Persian Architecture and an excellent example of Islamic era architecture of Iran. The Shah Mosque of Isfahan is one of the everlasting masterpieces of architecture in Iran. It is registered, along with the Naghsh-e Jahan Square, as a UNESCO World Heritage Site. Its construction began in 1611, and its splendor is mainly due to the beauty of its seven-colour mosaic tiles and calligraphic inscriptions. The mosque is one of the treasures featured on Around the World in 80 Treasures presented by the architecture historian Dan Cruickshank.

The mosque is depicted on the reverse of the Iranian 20,000 rials banknote.

Design the four-iwan style
The Safavids founded the Shah Mosque as a channel through which they could express themselves with their numerous architectural techniques. The four-iwan format, finalized by the Seljuq dynasty, and inherited by the Safavids, firmly established the courtyard facade of such mosques, with the towering gateways at every side, as more important than the actual building itself. During Seljuq rule, as Islamic mysticism was on the rise and Persians were looking for a new type of architectural design that emphasized an Iranian identity, the four-iwan arrangement took form. The Persians already had a rich architectural legacy, and the distinct shape of the iwan was actually taken from earlier, Sassanid palace-designs,such as The Palace of Ardashir. Thus, Islamic architecture witnessed the emergence of a new brand that differed from the hypostyle design of the early, Arab mosques, such as the Umayyad Mosque. The four-iwan format typically took the form of a square shaped, central courtyard with large entrances at each side, giving the impression of being gateways to the spiritual world.

Standing in the public square, or Maidan, the entrance-iwan (gateway) to the mosque takes the form of a semicircle, resembling a recessed half-moon and measuring 27 meters in height, the arch framed by turquoise ornament and decorated with rich stalactite tilework, a distinct feature of Persian Islamic architecture. At the sides rise two minarets, 42 meters high, topped by beautifully carved, wooden balconies with stalactites running down the sides. Master calligrapher of the Royal court, Reza Abbasi, inscribed the date of the groundbreaking of the construction, and besides it, verses praising Muhammad and Ali. In the middle, in front of the entrance, stood a small pool and a resting place for the horses, and inside the worshippers found a large marble basin set on a pedestal, filled with fresh water or lemonade. This basin still stands as it has for four hundred years, but no longer serves the function of providing refreshments to the worshipers at the Friday prayers. #citymity

When passing through the entrance portal, one reaches the main courtyard, centered around a large pool. The two gateways (iwans) on the sides leads ones attention to the main gateway at the far end, the only one with minarets, and behind it the lofty dome, with its colorful ornamentation.

The distinct feature of any mosque is the minaret, and the Masjed-e Shah has four. Still, in Persian mosques, tall minarets were considered unsuitable for the call to prayer, and they would add an aedicule, known in Persian as a goldast (bouquet) for this particular purpose, which in the Masjed-e Shah stands on top of the west iwan.

Religious buildings
Inside, the acoustic properties and reflections at the central point under the dome is an amusing interest for many visitors, as the ingenuity of the architects, when cre