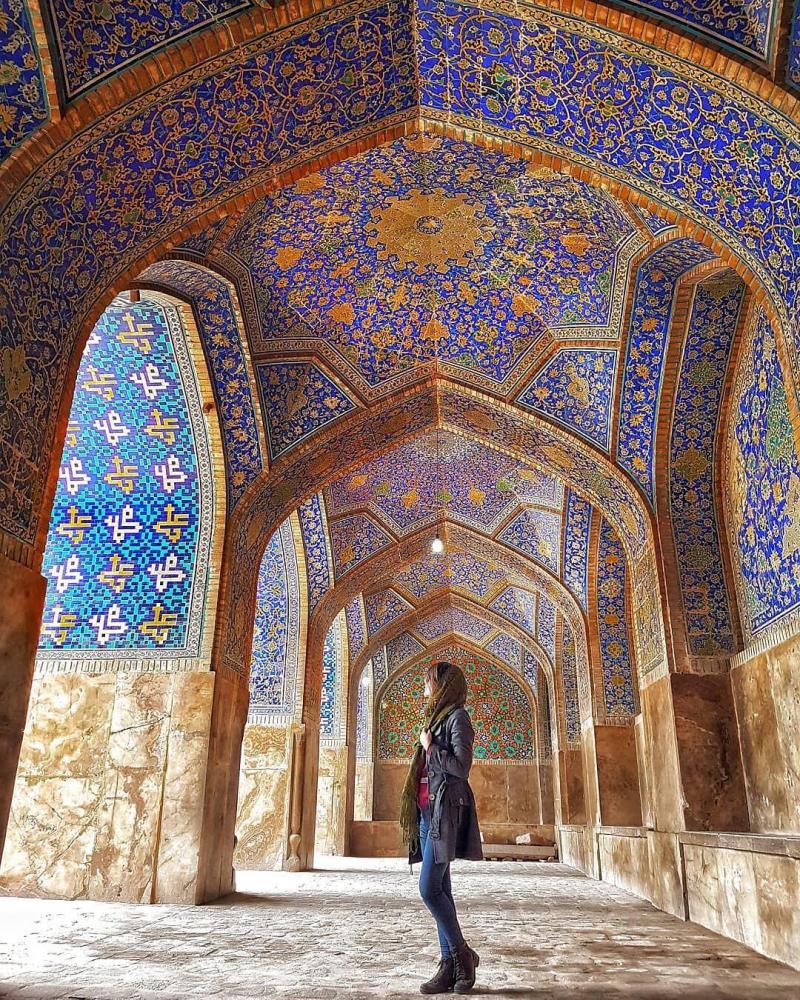 How to travel to Shah Mosque ( Imam Mosque or Masjede Emam ) in Isfahan :

Isfahan, a city you don’t to leave of your Iran itinerary. There is a reason it attracts so many tourist, local and foreign, to the city. The city is filled with stunning architecture and has one of the most amazing, and maze like bazars I have seen in Iran. Try the local dishes such as Biryani (no not the Indian rice dish), see the dried river and watch a sunset from the famous bridge. But in the end, my favorite spot must be the Shah Mosque, also known as the New Abbasi Mosque, in Isfahan, Iran’s most beautiful mosque.

WHERE IS THE SHAH MOSQUE?
The Shah Mosque is located in the beautiful city of Isfahan, or Esfahan, and according to the Persian Saying: “Isfahan is half the world”. The city is filled with stunning mosques, bridges and beautiful squares… in other words, this city will keep you busy for days. You can find the Shah Mosque at the Naqsh-e Jahan Square. This large square is well known and borders the bazar and many other mosques, a must see when you are in Isfahan! To give you a better idea of where the Shah Mosque is located, please find a map below.

THE SHAH MOSQUE IN ISFAHAN
The Shah Mosque in Isfahan is one of the most famous architectural buildings of the country, it is even so famous that you can find the building portrayed on the 20K Rial bill. The construction of this mosque started in the early 17th century and is beautifully decorated with seven colored wall tiles, creating stunning mosaic patterns and calligraphy. You could wander around the mosque for days, simply staring at the different patterns to be found on the wall, and don’t forget to look up, as some of the most beautiful architecture is actually located on the ceiling.

Under the central dome, right in the middle, you will find a stone that is not matching with the stone around it. This stone marks an important acoustic point in the Shah Mosque. From here the sound echoes loudly through the rest of the building, allowing the imam to speak at a lower volume but still be heard by everyone in the mosque. You can test the phenomenon out yourself by for example stamping on the ground on the stone, standing on the stone and clapping your hand or by dropping a book on the stone, you will hear the loud sound echoing through the mosque, something that seems to be tested by many of the touristic visitors of the mosque.

This elegant #mosque, with its iconic #blue_tiled mosaics and its perfect proportions, forms a visually #stunning monument at the head of Esfahan's main square. Unblemished since its construction 400 years ago, it stands as a #monument to the vision of Shah Abbas I and the accomplishments of the Safavid dynasty. The mosque's crowning dome was completed in 1629, the last year of the reign of Shah Abbas.