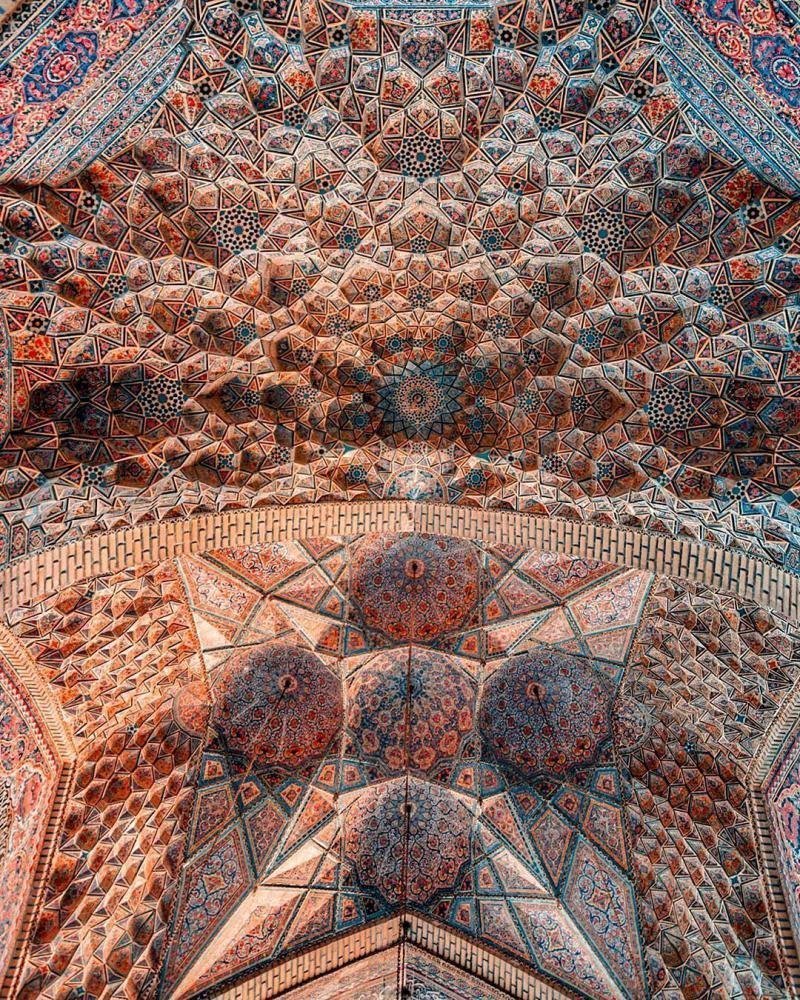 Travel to Nasir Almulk Mosqu of Shiraz
One of the most elegant and most photographed pieces of #architecture in southern #Iran, the Pink #Mosque was built at the end of the 19th century and its coloured tiling (an unusually deep shade of blue) is exquisite. There are some particularly fine #muqarnas in the small outer portal and in the northern iwan, but it is the stained glass, carved pillars and polychrome faience of the winter prayer hall that dazzle the eye when the sun streams in.

The mosque is called by many different names. Mostly known as the “Pink Mosque”, it is also called the “Mosque of colours,” the “Rainbow Mosque” or the “Kaleidoscope Mosque”. This is a space where light and worship intertwine. The mosque comes to life with the sunrise and colours dance throughout the day like whirling dervishes. It reflects on the ground, walls, the arches and the towering spires. It even reflects on the visitors as if a colourful ball is hit by the first sun ray and explodes to thousands of butterflies all around.

The original name of the mosque in Persian is Masjed-e Naseer ol Molk. Wikipedia mentions it as an ordinary Iranian mosque; however, the interior hides an impressive piece of architecture and design.

Built by the order from one of the lords of the Qajar Dynasty, Mirza Hasan ‘Ali Nasir al-Mulk, it took 12 years to complete in 1888. Its interior reveals a magnificent masterpiece of design with stunning colours.

The designers Muhammad Hasan-e-Memar and Muhammad Reza Kashi Paz-e-Shirazi used extensively stained glass on the façade and other traditional elements such as panj kāseh-i (five concaves), which create a breath taking effect of the interior like standing in a kaleidoscope. Once the sunlight hits the stained glass, the entire building is flooded by a vibrant rainbow of colours. In popular culture, the mosque is also called Pink Mosque, because its tiles are beautifully decorated with a pre-eminently pinkish rose colour.

The mosque attracts most visitors early in the morning (9am to 11am is best) when the hall and its Persian carpets are illuminated with a kaleidoscope of patterned flecks of light. It makes for a magical experience – and an irresistible photograph.