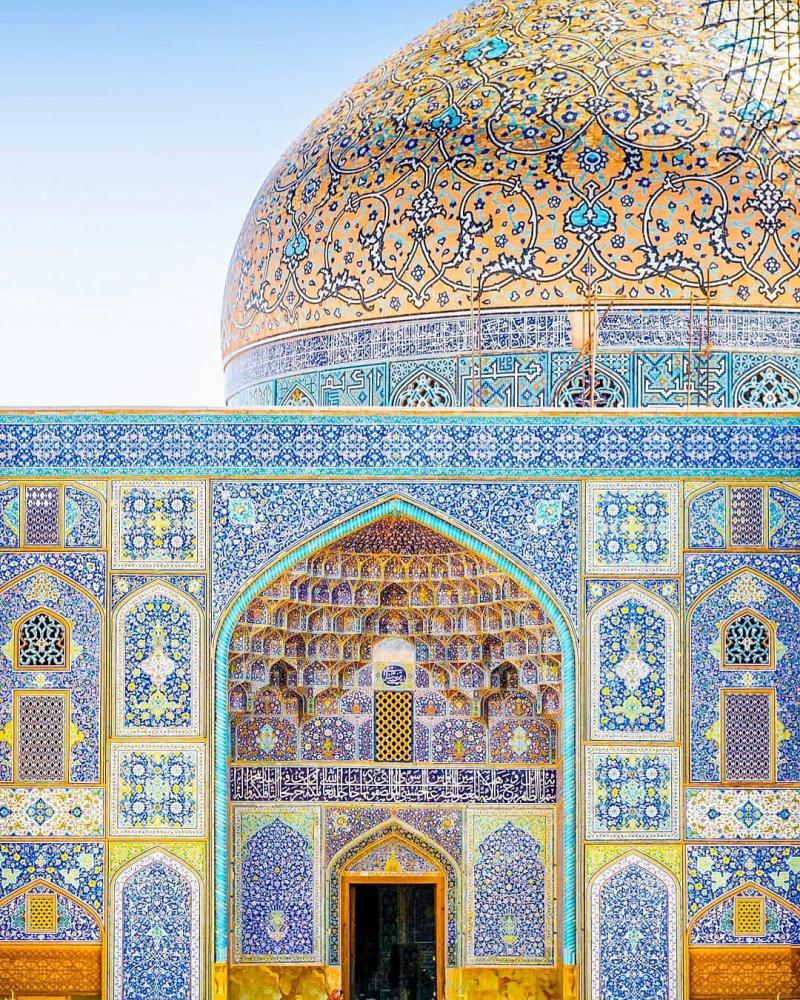 Travel to Sheikh Lotfollah Mosque of Isfahan
Sheikh Lotfollah #Mosque is one of the #masterpieces of Iranian #architecture. It was built by the prominent architect Sheikh Bahai in the early 17th century (from 1603 to 1619) under the order of Shah Abbas the Great- the 5th Safavid king. The starting date for the construction is visible on Reza Abbasi’s inscription on the main entrance. The mosque is located on the eastern side of Naqsh-e Jahan Square (UNESCO #World_Heritage Site and one of the largest squares in the world with 160 meters wide and 508 meters long) just opposite Ali Qapu Palace, Isfahan, #Iran. Its northern side opens into the Isfahan Grand Bazaar. Visit unique Sheikh Lotfollah Mosque When Traveling to Iran and enjoy its unique exquisite tile work.

Sheikh Lotfollah Mosque is one of the architectural masterpieces of Iranian architecture that was built during the Safavid Empire, standing on the eastern side of Naqsh-i Jahan Square, Esfahan, Iran. Construction of the mosque started in 1603 and was finished in 1619.

Punctuating the middle of the arcades that hem Esfahan's largest square, this study in harmonious understatement complements the overwhelming richness of the larger mosque, Masjed-e Shah, at the head of the square. Built between 1602 and 1619 during the reign of Shah Abbas I, it was dedicated to the ruler’s father-in-law, Sheikh Lotfollah, a revered Lebanese scholar of Islam who was invited to Esfahan to oversee the king’s mosque (now the Masjed-e Shah) and theological school.

The dome makes extensive use of delicate cream-coloured tiles that change colour throughout the day from cream to pink (sunset is usually the best time to witness this). The signature blue-and-turquoise tiles of Esfahan are evident only around the dome’s summit.

The pale tones of the cupola stand in contrast to those around the portal, which displays some of the best surviving Safavid-era mosaics. The exterior panels contain wonderful arabesques and other intricate floral designs that have become a signature motif of Esfahan; especially fine are those displaying a vase framed by the tails of two peacocks. The portal itself contains some particularly fine #muqarnas (stalactite-type stone carving used to decorate doorways and window recesses) with rich concentrations of blue and yellow motifs.

The mosque is unusual because it has neither a minaret nor a courtyard, and because steps lead up to the entrance. This was probably because the mosque was never intended for public use, but rather served as the worship place for the women of the shah’s harem. The sanctuary or prayer hall is reached via a twisting hallway where the eyes become accustomed to the darkness as subtle shifts of light play across deep blue tilework. This hallway is integral to both the design and function of the mosque because it takes the worshipper from the grand square outside into a prayer hall facing Mecca, on a completely different axis.

Inside the sanctuary, the complexity of the mosaics that adorn the walls and the extraordinarily beautiful ceiling, with its shrinking, yellow motifs, is a masterpiece of design. The shafts of sunlight that filter in through the few high, latticed windows produce a constantly changing interplay of light and shadow that enrich the space and give a tangible quality to empty air. The mihrab is one of the finest in Iran and has an unusually high niche; a calligraphic montage names the architect and the date 1028 AH.

Photography is allowed but using a flash is not.