TRAVEL TO VAKIL MOSQUE OF SHIRAZ
Travel TO Shiraz In Iran 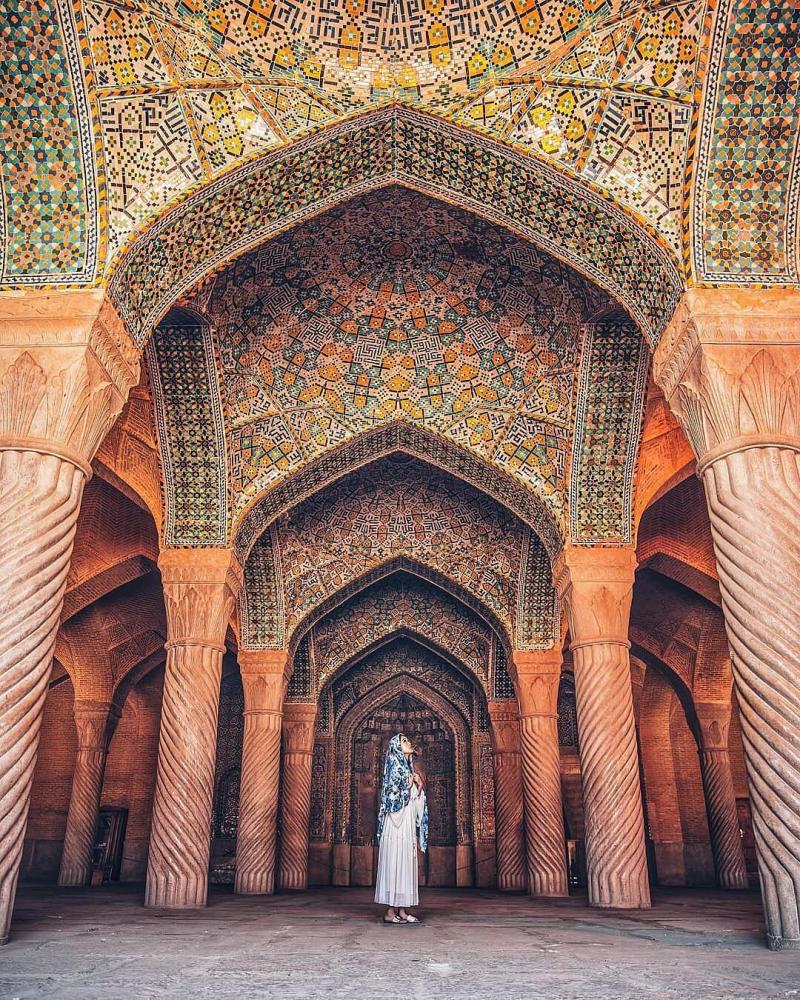 Travel To Vakil Mosque of Shiraz - Iran
Begun in Karim Khan’s time, this mosque next to the tribal arts arcade in the Bazar-e Vakil has an impressive tiled portal, a recessed entrance decorated with Shirazi rose-pink tiles, two vast iwans, a #magnificent inner courtyard surrounded by beautifully tiled alcoves and porches, and a pleasingly proportioned 75m-by-36m vaulted prayer hall. The distinguishing feature of the #mosque, however, is the forest of 48 diagonally fluted columns that support the prayer hall, displaying a hypnotic rhythm of verticals and arabesques.
Other fine features include an impressive mihrab and 14-step marble minbar, carved from a monolith transported all the way from Azerbaijan. Much of the tiling, with its predominantly floral motifs, was added in the early Qajar era.

Vakil Mosque
The Ancient Mosque:
One of the many things you can do after travelling to Shiraz is to find Darb-e Shahzadeh region and drown in the many attractions it offers. Vakil Mosque or Soltani Mosque shines brightly among these attractions. It was built in Zand era upon the command of Karim Khan Zand. It was also registered on Iran National Heritage list in 1932.

Location of Vakil Mosque:
For travellers who likes to see shiraz , Vakil Mosque is located in the vicinity of Vakil Bazaar ( #vakilbazar) and Vakil Bath ( #vakilbath). Together with Vakil Mosque, they build up an enormous complex of Vakil that was built on Karim Khan Zand command. The great architecture and structure of this complex have caused it to be remembered as one of the most popular attractions of Shiraz. Other nearby attractions to this amazing place are Pars Museum and Atiq Jame Mosque.

History of Vakil Mosque:
Karim Khan Zand is more or less known to everybody, especially those who are interested in the history of Iran. Yes, he is the king who established many priceless and glorious buildings and left them all as reminiscence for the next generations. He selected Shiraz as the capital city and since then it had always been in the center of his attention. So, it brought a splendid era to Shiraz. Vakil Complex is one of those many contributions he made to Shiraz. Vakil Mosque is one of the buildings in this complex. According to authentic documents, Vakil Mosque was built in 1773. It was simultaneously under construction together with Vakil Bazaar and the square. There are also some narratives signifying that Vakil Mosque was renovated by Hossein Ali Mirza Farmanfarma, the son of Fath Ali Shah Qajar.

Architecture of #VakilMosque:
Vakil Mosque is an 8660 square meter premium built on an 11000 square meter space. The architect of the mosque is unfortunately not known yet. The pattern of this mosque is designed to include two verandas and two southern and eastern seraglios. Generally speaking, different parts of this mosque are the entrance, corridor, yard, large seraglio, winter seraglio, altar, Islamic marble pulpit, two verandas, and pearl arch. The architectural detail of Vakil Mosque is admirable but the most amazing parts are its three arches that are unrivaled in Shiraz at least: the arch above the entrance, the pearl arch, and the large seraglio arch. The carvings on these arches are too fabulous to be ignored. The simplicity of the Iranian art and Persian paintings and writings on the walls, eye-catching tiling, and the delicate use of colors are all the beautiful details that immediately attract any visitors.

When to Visit Vakil Mosque:
If you are interested in visiting Vakil Mosque, you may also want to know its visiting hours. The mosque is opened at 8:30 and is closed at 20:30 in spring and summer and at 20:00 in autumn and winter.