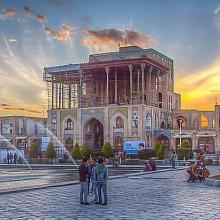 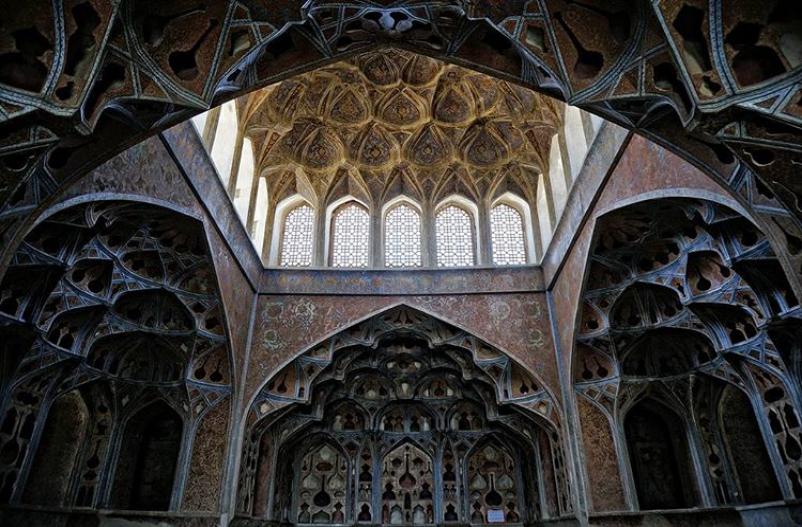 Ali Qapu Interiors, Naghsh-e Jahan , Isfahan, IRAN
Aali Qapu Architecture
Aali Qapu is rich in naturalistic wall paintings by Reza Abbassi, the court painter of Shah Abbas I, and his pupils. There are floral, animal, and bird motifs. The highly ornamented doors and windows of the palace have almost all been pillaged at times of social anarchy.
Only one window on the third floor has escaped the ravages of time. Aali Qapuwas repaired and restored substantially during the reign of Shah Sultan Hussein, the last Safavid ruler, but fell into a dreadful state of dilapidation again during the short reign of invading Afghans. Under the Qajar Nasir al-Din shah's reign (1848–96), the Safavid cornices and floral tiles above the portal were replaced by tiles bearing inscriptions.
Shah Abbas II was enthusiastic about the embellishment and perfection of Aali Qapu. His chief contribution was given to the magnificent hall, the constructures on the third floor. The 18 columns of the hall are covered with mirrors and its ceiling is decorated with great paintings.
The chancellery was stationed on the first floor. On the sixth, the royal reception and banquets were held. The largest rooms are found on this floor. The stucco decoration of the banquet hall abounds in motif of various vessels and cups. The sixth floor was popularly called (the music room).

Here various ensembles performed music and sang songs. From the upper galleries, the Safavid ruler watched polo, maneuvers and the horse-racing opposite the square of Naqsh-i-Jahan.
The Aali Qapu building was built in several stages, beginning from a building with a single gate, with entrance to the government building complex, and gradually developed, ending in the existing shape. The period of the development, with intervals, lasted approximately 70 years.