THE REICHSTAG DOME IS A GLASS DOME , CONSTRUCTED ON TOP OF THE REBUILT REICHSTAG BUILDING IN BERLIN
lilia In Germany 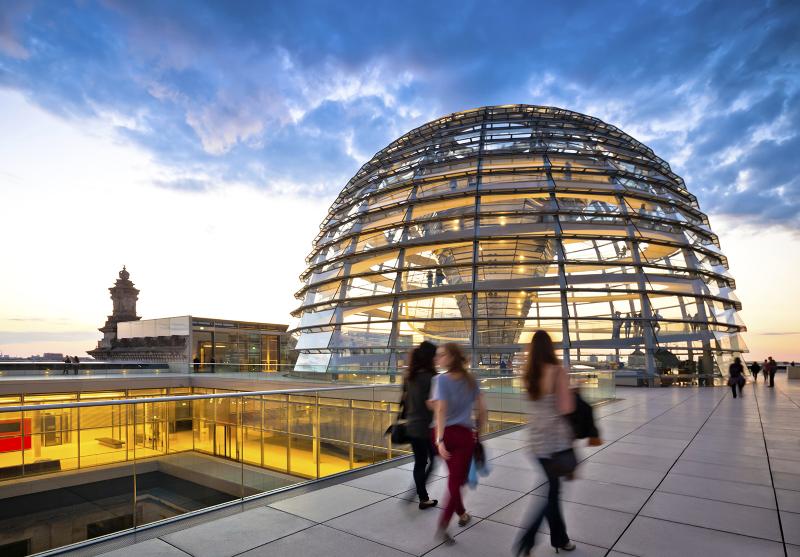 The current Reichstag dome is a glass dome, constructed on top of the rebuilt Reichstag building in Berlin. It was designed by architect Norman Foster and built to symbolize the reunification of Germany. The distinctive appearance of the dome has made it a prominent landmark in Berlin.

Design
The Reichstag dome is a large glass dome with a 360 degree view of the surrounding Berlin cityscape. The debating chamber of the Bundestag, the German parliament, can be seen down below. A mirrored cone in the center of the dome directs sunlight into the building, and so that visitors can see the working of the chamber. The dome is open to the public and can be reached by climbing two steel, spiraling ramps that are reminiscent of a double-helix. The Dome symbolizes that the people are above the government, as was not the case during National Socialism.

The glass dome was also designed by Foster to be environmentally friendly. Energy efficient features involving the use of the daylight shining through the mirrored cone were applied, effectively decreasing the carbon emissions of the building.

The futuristic and transparent design of the Reichstag dome makes it a unique landmark, and symbolizes Berlin's attempt to move away from a past of Nazism and instead towards a future with a heavier emphasis on a united, democratic Germany.