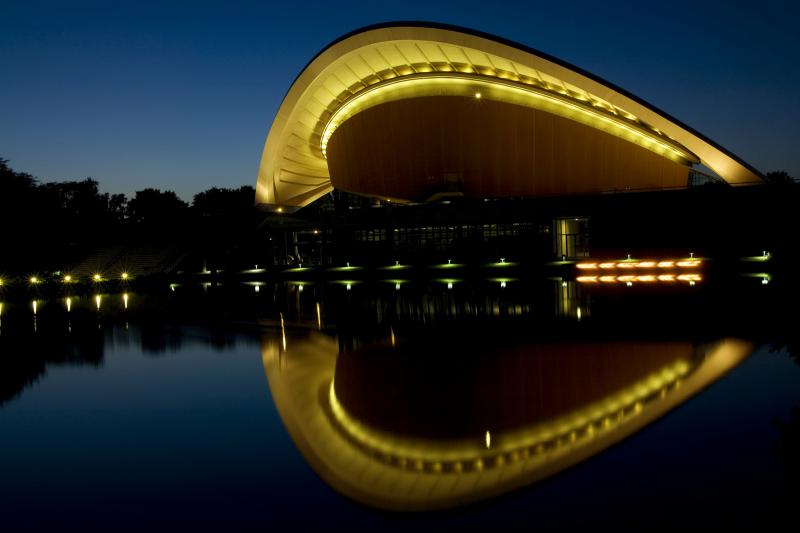 The Haus der Kulturen der Welt ("House of the World's Cultures") in Berlin is Germany's national centre for the presentation and discussion of international contemporary arts, with a special focus on non-European cultures and societies. It presents art exhibitions, theater and dance performances, concerts, author readings, films and academic conferences on Visual Art and culture. It is one of the few institutions which, due to their national and international standing and the quality of their work, receive funding from the federal government as so-called "lighthouses of culture."

The building is located in the Tiergarten park and a direct neighbour of the Carillon and the new German Chancellery. It was formerly known as the Kongresshalle conference hall, a gift from the United States, designed in 1957 by the American architect Hugh Stubbins as a part of the International Building Exhibition. John F. Kennedy spoke here during his June 1963 visit to West Berlin. On May 21, 1980 the roof collapsed killing one and injuring numerous people. The hall was rebuilt in its original style and reopened in 1987 in time for the 750 year anniversary of the founding of Berlin. To Berliners it is also known as the Schwangere Auster ("pregnant oyster").

Outside the entrance, Henry Moore's heaviest bronze sculpture, Large Divided Oval: Butterfly (1985-86), stands in the middle of a circular basin. Weighing nearly nine tons, it was his final major work, completed just before he died.[3] One of three public Moore sculptures in Berlin (the others being Three Way Piece No.2: The Archer (1964-65) at the Neue Nationalgalerie and Reclining Figure (1956) at the Akademie der Künste), Butterfly was initially a loan to (then West) Berlin in 1986, but the city council wanted the sculpture permanently, and asked Moore if he would donate it. The letter arrived just before his death and went unanswered. In 1988 it was sold by the Henry Moore Foundation to Berlin for 4.5 million Deutsche Mark (around $2.58 million at the exchange rate of the day), then a huge sum for a public sculpture. The sculpture was eventually badly damaged by a combination of environmental pollution and vandalism, and restored in 2010.